We can learn so much about communication from almost any scenario. Take Christmas. 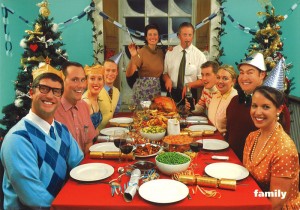 Nan sits there near the tree, staring at the television, hands in her lap, nursing a plate of half eaten mince pie. She doesn’t say a great deal. She suffers from selective deafness. Her aural function however is incredible if the phrase ‘cup of tea anyone?’ is uttered within a ten metre radius. ‘Yes please dear!’ she’ll shout to whomever made the offer.

Uncle Dave has been on the Stella since lunchtime. He doesn’t stop talking or cracking jokes. He doesn’t bother making eye contact with anyone because deep down he knows that no-one really wants to lock irises with him. He knows that he’s doing everyone a favour by forcing this one less intrusion upon them. He knows he’s loud, a bit crude and not all that funny but he does know that when there IS a lull, it’s Uncle Dave they’ll all be grateful for. Isn’t it?

Dave’s long suffering girlfriend Sue flaps her hands a lot. She doesn’t drink, she’s the designated driver, however she loves to be the conveyer of drama and intrigue and her primary mission is to engage eye-contact and ‘lock-on’ like a limpet. She loves to talk, to impart, to divulge and to express as if her regurgitated gossip is a gift wrapped basket of wisdom rather than a second hand sack of hearsay.

Mum Pam rules the kitchen, and the house. She barks orders at Dad who chops, peels and slices. Mum wants Dad Stan to be Jamie Oliver. Dad is more Oliver Hardy. However he wants a peaceful life and that means a happy wife so he does as he is ordered without argument.

Son Jason wants to be at the pub. He thinks there is still a way. He has purchased generous and well thought out gifts for his family. He will charm them into a two hour reprieve this afternoon and slink away for three pints of Guinness. He can and he will.

Spoilt daughter Amber is preparing her ‘tears of devastation’ if her top three desired presents fail to materialise. There is, after all, the Boxing Day sales and Dad Stan cannot bear the sound of female sobbing.

Sound familiar? How could this possibly not translate to the workplace?

There can be positive aspects to almost all of the above personality traits if used in a positive context. Recognising them and harnessing them is the skill. Learning about yourself, how you come across is the next step.

For example, if you want to get someone to do something and be happy about doing it for you then learning how to be assertive, convincing and charming is key. If you appear to be a pompous, manipulative bully I suspect success will be elusive. Obvious but true.

For more information about public speaking go to www.surespeech.co.uk